Skip to content
Hello Dear Readers!
Today I am delighted to introduce you to Jack Lewis Baillot. Now, oh, what does one say about Jack? Jack is wonderful, clever, creative and ever so much fun, and all of my books are on my list of I am going to buy and read these, I have a few of the ebooks but I am really wanting them in paperback–so one of you dear readers are going to be ever ever so lucky to snag a copy of Jack’s latest work. (I am going to try and not be jelous–I promise.) However, not to miss out on any of Jack’s brilliance, go follow her blog However Improbable, you won’t regret it. 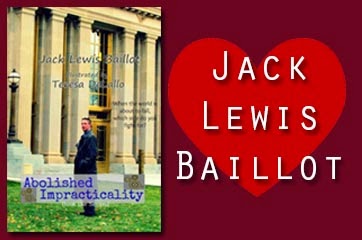 Now for our fabulous interview with Jack…

What do you love about writing?
I love the characters. The plots are fun, I like it when I come up with a new, exciting one. But the thing that keeps me going is the characters. I love all of them, even when they stand over my shoulder and threaten me with their swords. Even when they make me cry or irritate me. Or don’t tell me what is going on with the story. I adore them all – at least most of them.
Who is your favorite book couple ever?
Oh dear….Um…well, they aren’t really a couple yet. I hope they become one, even though he is sweet with the other girl – no, it isn’t really a love triangle. He is supposed to marry one girl, but he loves another. And the girl he is supposed to marry isn’t rotten or anything, and she is best friends with the girl he loves so I think when she finds out she is going to insist he marries the other girl. But the couple I am talking about is Kiggs and Phina from Seraphina. Amazing book. And Kiggs is one of the coolest book heroes I’ve ever come across.
Also, I love Howl and Sophie – OH!!!! And Annabeth and Ransom from Annabeth’s War! I love those two so much!
What is your favorite “first meeting” between a story couple?
Ug….I don’t think I read enough couple stories for this. (Oh, but I get why you are asking couple questions now! Brilliant me.) Kiggs and Phina’s was sweet. She was worried he was going to be an annoying, snobbish prince but he just walked into the middle of this crowd and talked to them all like they were his best friends. Oh, but I think my favourite would be Han and Leia. “No amount of reward money is worth this.” I always like it when couples start out as enemies and fall in love.
What couple did you ship, only to be disappointed?
Luna and Neville. But, like almost everyone else in the world, I pretty much refuse to believe they ended up with anyone else. Really, can you imagine a couple who would be more amazing together?
Also Jill and Eustice. I never really cared about shipping anyone from the Narnia books, but out of everyone who I thought would end up together, they were the only two.
What couple ended up together, but you wish they hadn’t?
Percy Jackson and Annabeth. I know, shocking. But, after they became a couple, Percy stopped because AS cool. And I also didn’t like Will and Alyss together, because I couldn’t stand Alyss. Tom and Hester from the Mortal Engine books, because the second book was weird with them as a couple….and I will stop there.
What confession/ proposal or wedding touched your heart?
Ransom’s to Annabeth. (His was sweet, very sweet.) I don’t know why, but I’ve always liked Laurie’s to Amy as well, I even go around quoting it sometimes. “We pull together very well, don’t we?” I can’t really think of a whole lot – more books need proposals.

On a different kind of love, what is your favorite bro-mance or sisterhood in a novel?
Oh dear….Haddock and Tintin – I know they aren’t blood brothers, but they are close enough (maybe sometimes more like uncle and nephew, but you know what I mean.) Sherlock and Watson. Aragorn, Legolas, and Gimli. Pippin and Merry. Sam and Fordo. Peter and Edmund. Caspian and Edmund. Jack and Art (the Larklight books.) HALT AND WILL!! (Again, not exactly brothers, more like father and son, but….I love them together and I couldn’t help myself.) Bassa and Bryon from CassaStar. (Yeah, I have a long list. And that isn’t even half.)
What book really illustrates the love of God for us in a way that caught your attention?
The Lion, The Witch, and The Wardrobe. Well, on that same note, I felt that way about most of the Narnia books.
What is your favorite form of love to write into your own books?
Brothers, and best friends. Usually it turns out to be best friends who act like brothers. I also do a lot with the older brother and little sister. (I did both in The Broken Blade, and a good bit of it in the Haphazardly Implausible series.)
Do you have a favorite couple of those you’ve written? Why?
Yes. Grin I can’t really say which it is though without spoiling something. So I will do my next favourite. Aden and Lucy from the Haphazard books. They were just really sweet and a lot of fun, and neither was very romantic. They were the kind that just liked to sit around and talk and eat. Kind of like FitzSimmons in Agents of SHIELD. They weren’t romantic like a lot of the others try to be. They were just sweet.
Was there ever a couple in your stories that you were not planning on ending up together but finally ended up writing in?
Yes…and I got mad at him for it, and it lead to one of the reasons I killed him. (I took it out though and he technically never dies.) But anyways…eh, come to think of it, I can say this for all my characters. I just write them and they end up together and I never know where it comes from.
Do you find it harder or easier to write romantic love or friendship love in your books?
Hard to write romance when I actually have to write it. When romance ends up in my books I just stand back and do nothing and it all turns out okay. When I have to work at it it is HORRIBLE. But, friendships are the easiest for me, and I like writing them a lot. I love putting in a lot of characters with different personalities and watching who ends up becoming best friends with whom.
Do you have a favorite friend pair in your books?
Oh yes! Peter and Tony from Haphazardly Implausible. Out of everyone I don’t know how they’ve become my favourite, but I really have fun with those two. I think it might be the way Tony looks after Peter. He’s such a big brother to him.
Also, in The Broken Blade, Ryder-Adair and Striker are fast becoming my newest favourite friendship.
Favorite love story you’ve written?
You’re determined to find out, aren’t you? Okay, Peter and the girl he ends up with. (I will call her Emma because I don’t want to give away her name and do the whole spoiler thing.) Everything about their story I love – no, the book isn’t a romance one, but it has a bit in. A little bit.
What is your definition of love?
Love is accepting someone’s personality and not wishing to change it to fit your own, or the way you think they should be. It is helping each other in drawing closer to God. It is selfless, including learning how to selflessly accept love and help from each other, and not just give it. It isn’t putting blame on the other, it is not becoming angry over faults and mistakes but forgiving, no matter how often they are made. It is being there for each other, and it is encouraging and building each other up